We are in a very special moment of year in Ourense (Spain), because during these days the most awaited party of the year is taking place in the province, where formality is forgotten and laughter prevails. We are talking about "O Entroido" (The Carnival), a festival of great popular tradition and qualified as a "Festival of Tourist Interest" in Spain. 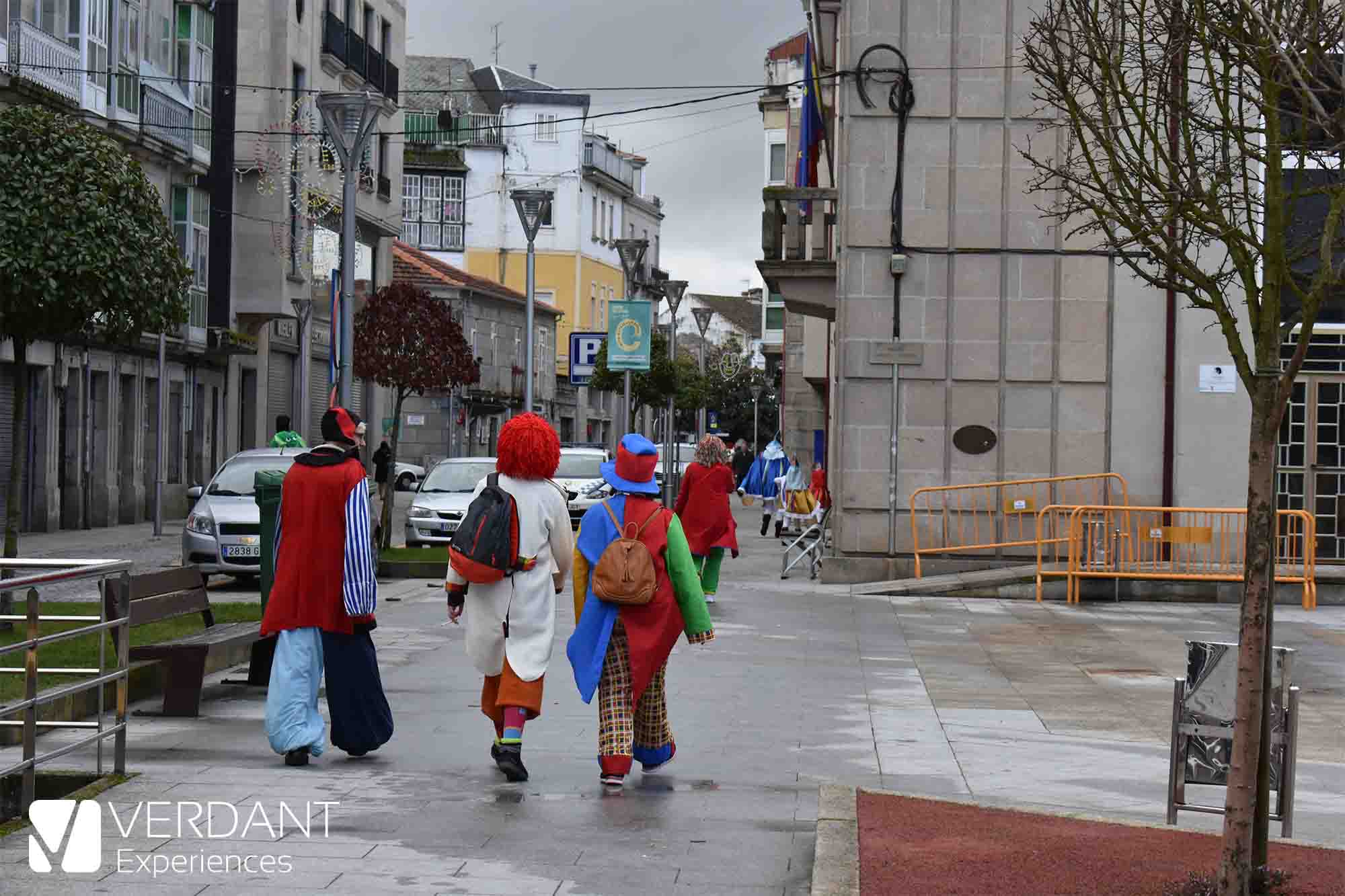 The party takes place in different locations in the province of Ourense (although also in other areas of Galicia), in which anyone can join conveniently disguised to avoid surprises... since going without a costume can have consequences such as having to pay a bunch of drinks (usually wine), or suffer a few strokes of a whip. 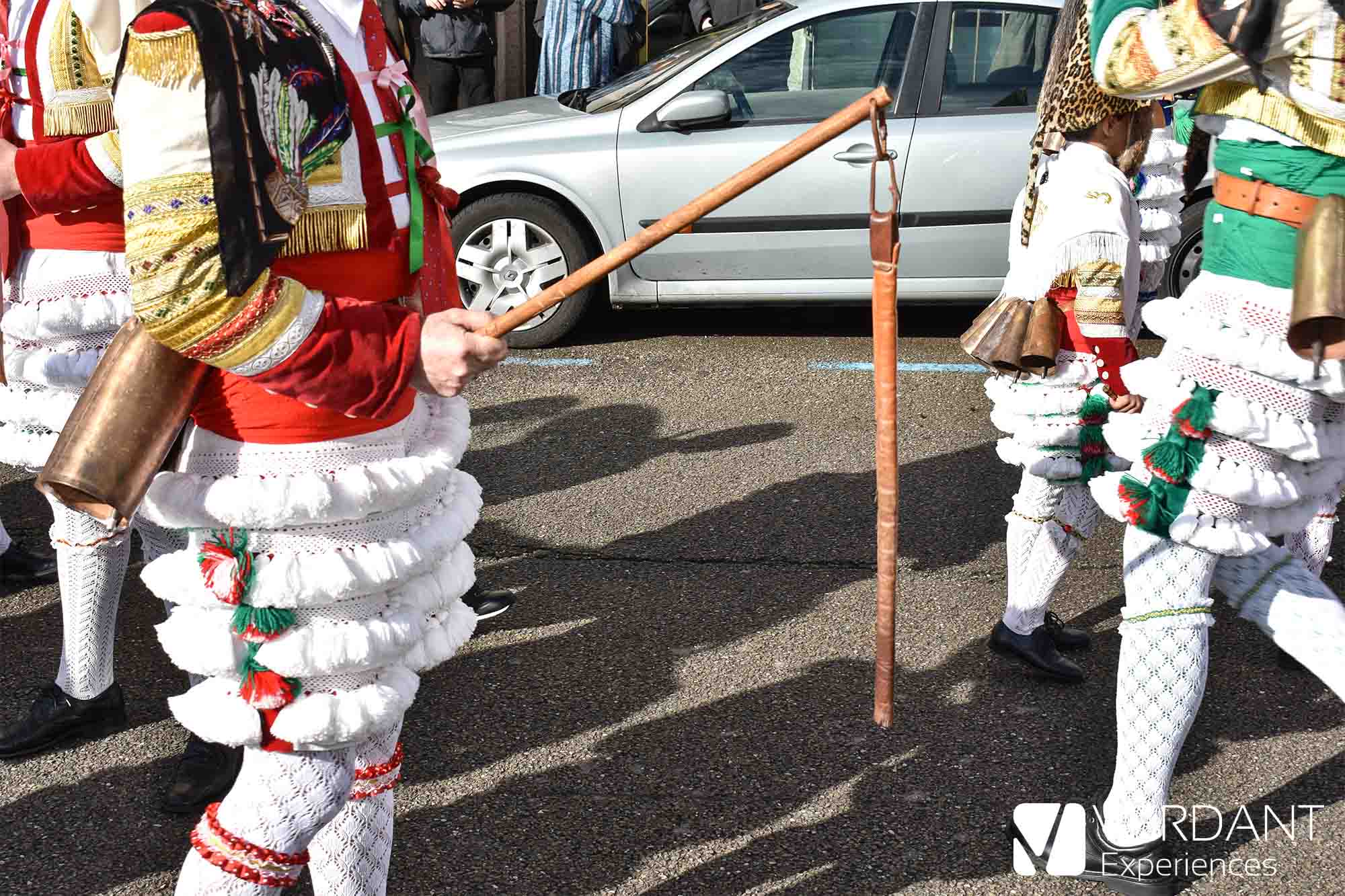 Let's talk a little bit about what you can find in two of the most recognized places for their Carnival traditions. First we will talk about Verín, a town where you will see a special character who wears a suit with a weight of up to 25 kg, hidding his face and also carrying a whip that he will not hesitate to use with whomever he thinks is necessary.

We are talking about the “Cigarrón”, a typical character of the carnival in Verín that appears in the 16th century and could have been originated as the figure of a tax collector (probably as unpopular at the time as the Tax Office is nowadays) or as a guard of the ecclesiastical orthodoxy. 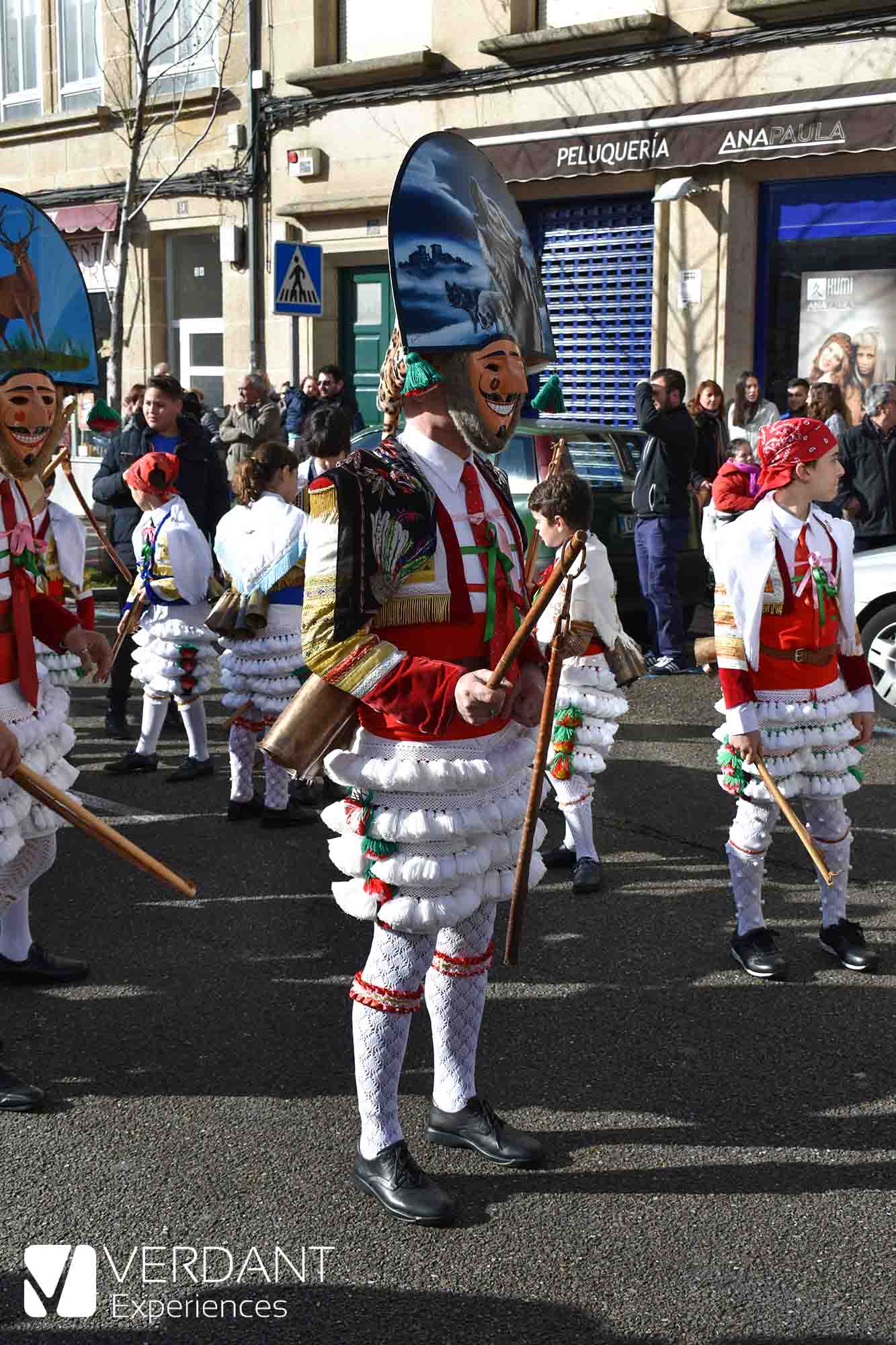 The costume he wears is made up of a wooden mask painted in colors and with motifs of animals or stars, behind which he wears a kind of synthetic leather or gazelle. A white shirt, tie and short jacket with golden fringes, a scarf on the shoulders, a red sash wrapped around the waist and on top of it some cowbells hanging from the belt. The legs are covered with white stockings and garters, black shoes and the famous "zamarra" (whip).

Nowadays wearing this costume is an honor that in most cases is transmitted from father to son, being necessary the help of several people to put on the costume.

For almost two weeks you can enjoy live music, parades, banquets and lots of parties. We would like to highlight the “Domingo de Corredoiro” and the “Jueves de Comadres”. 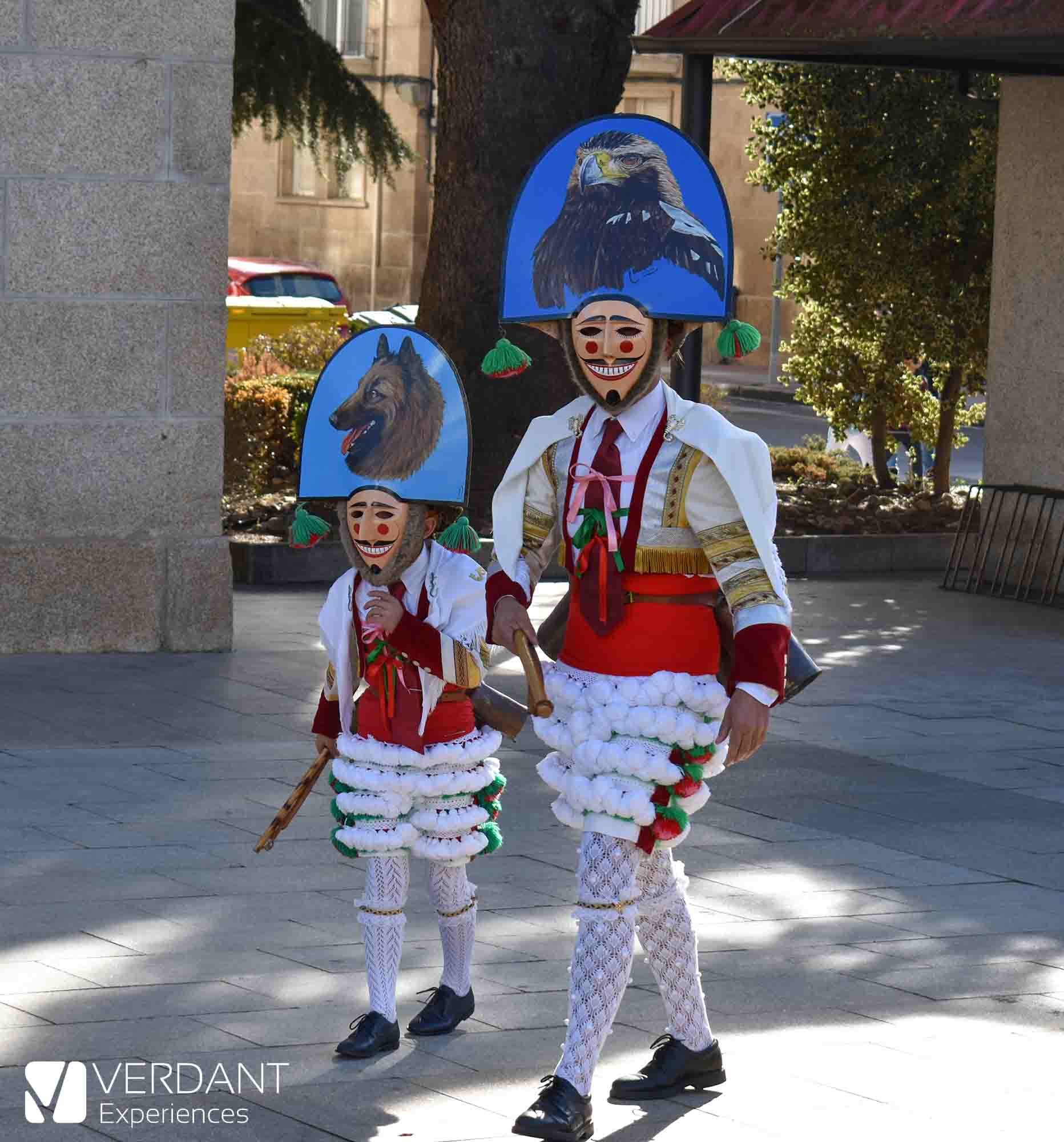 Another important location is Xinzo de Limia, where the "Entroido" (Carnival) is the most important festival of the year and is also considered the longest in Spain and probably in the world. It is celebrated for 5 weekends, starting the “Domingo Fareleiro” and ending the “Domingo de Piñata”. 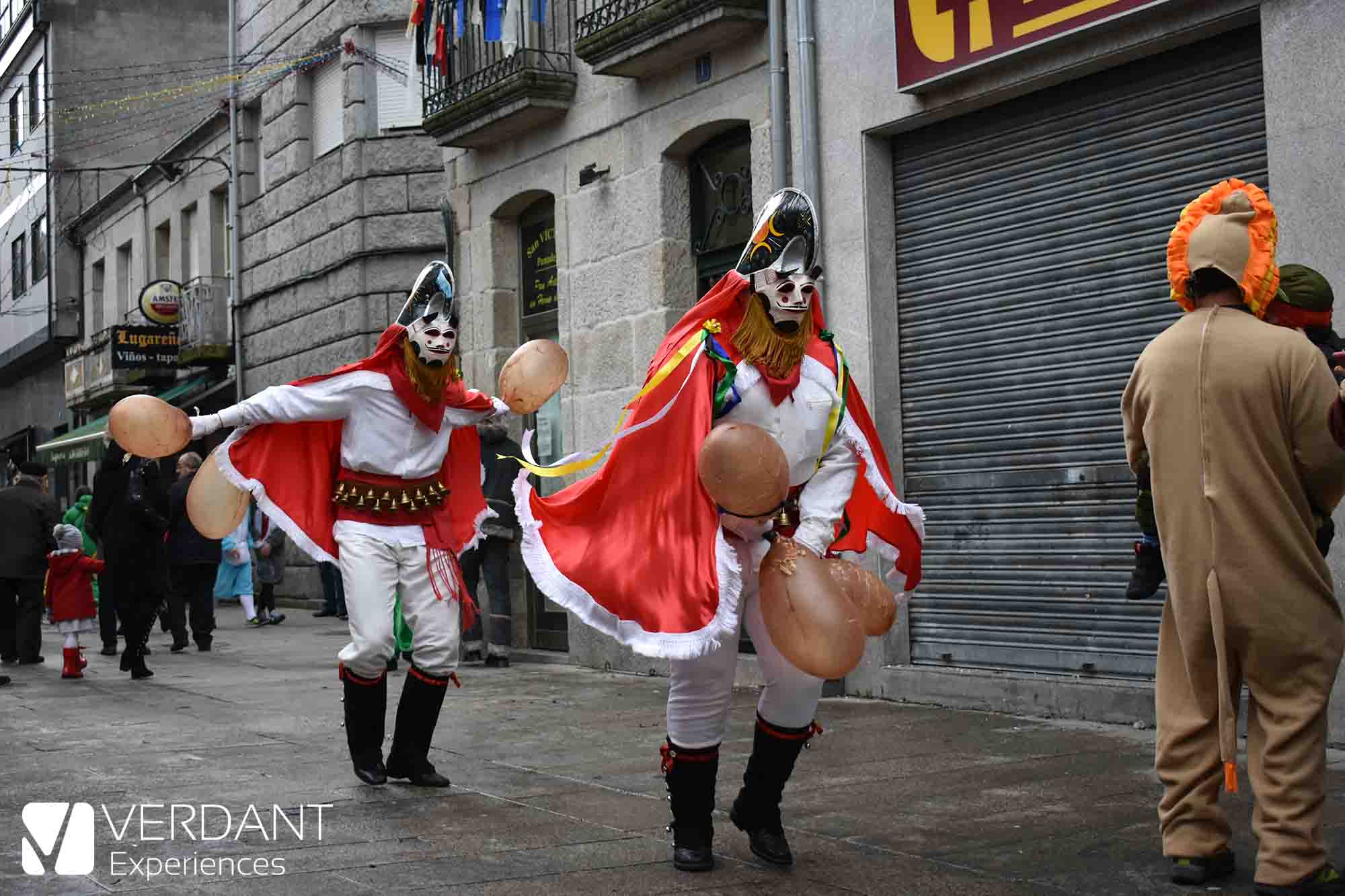 The typical character of this Carnival is the "Pantalla", which animates the streets during the celebration. In addition the “Pantallas” are responsible for watching that everyone wears a costume, if they find a woman without a costume she will be surrounded and the “Pantallas” will dance around her, and if they find a man without a costume they will chase and carry him in their arms to the nearest bar, to make him pay some drinks (mainly wine) for them and then continue the party. 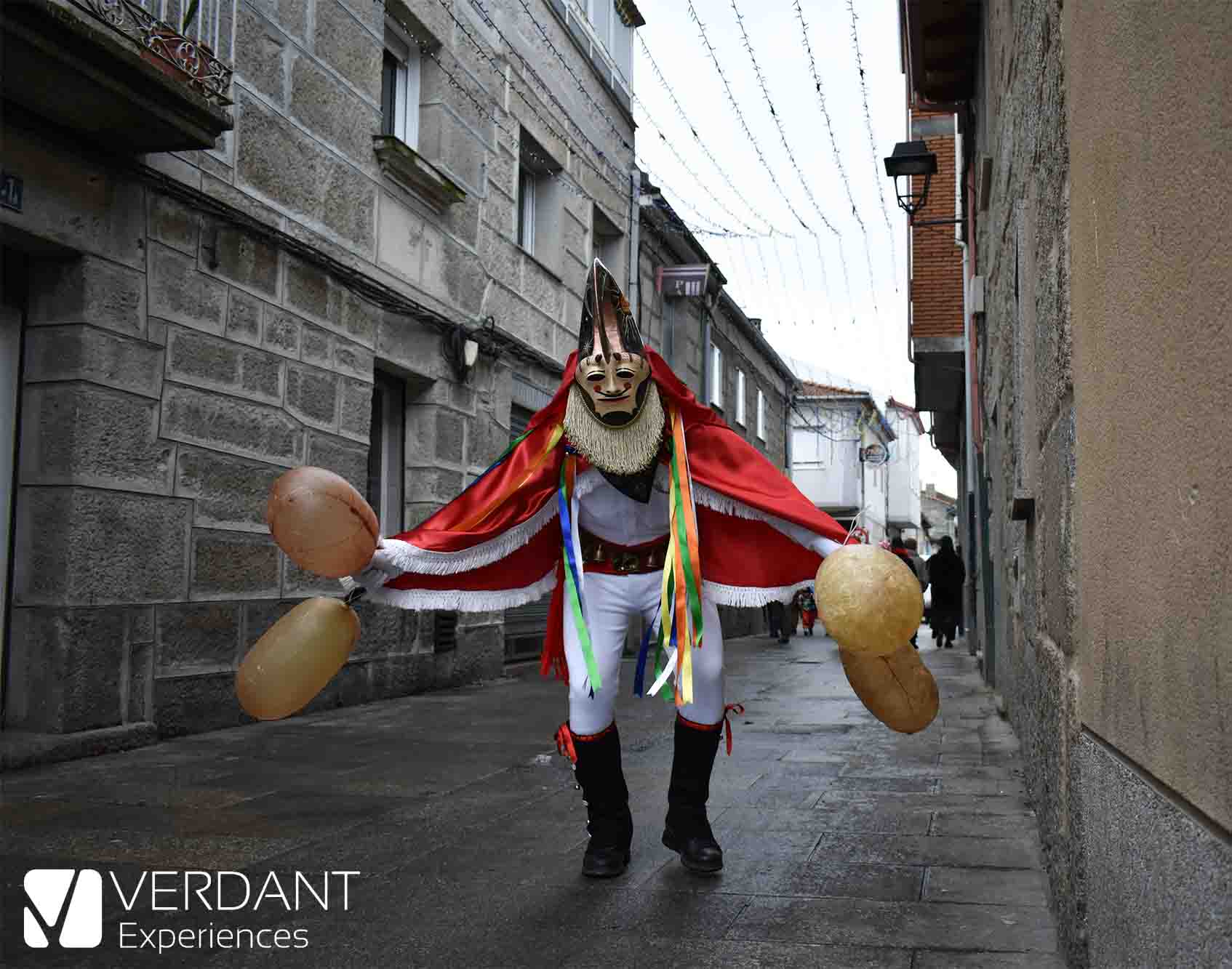 The costume of the “Pantalla” is made up of a mask that covers its face as a screen. This mask is made in one piece with paper pulp and painted with an image reminiscent of a devil mocking. With white shirt and shorts, leggings and black shoes, a red or black cape, red sash with small bells and a scarf. The costume is completed with 2 or 4 balloons made of bladders of animals that constantly beat each other; in addition to the sound of beating the balloons the “Pantallas” make another sound that can be frightening.

During those 5 weekends of celebration you can also find parades, brass bands, live music and lots of parties both during the day and during the night. The big day is “Martes de Entroido”, with a very busy parade of floats. 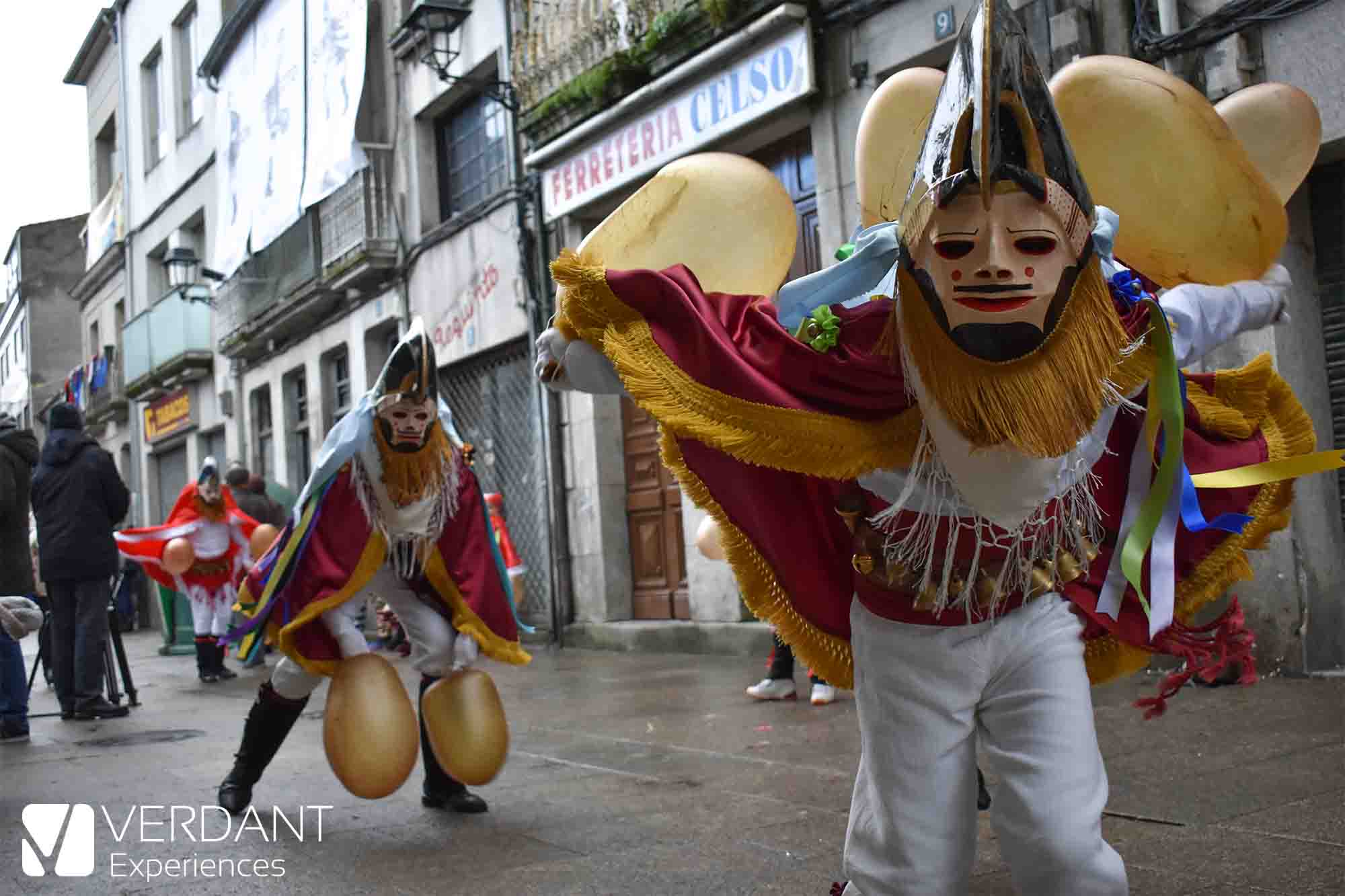 This is just a sample of what you can find in Ourense during carnivals. If you want to enjoy this traditional and unique party in the world, we can organize your getaway and customize it to your needs, do not hesitate to contact us for further information.